Has Flood Damage Stormed Into Your Vancouver Business? 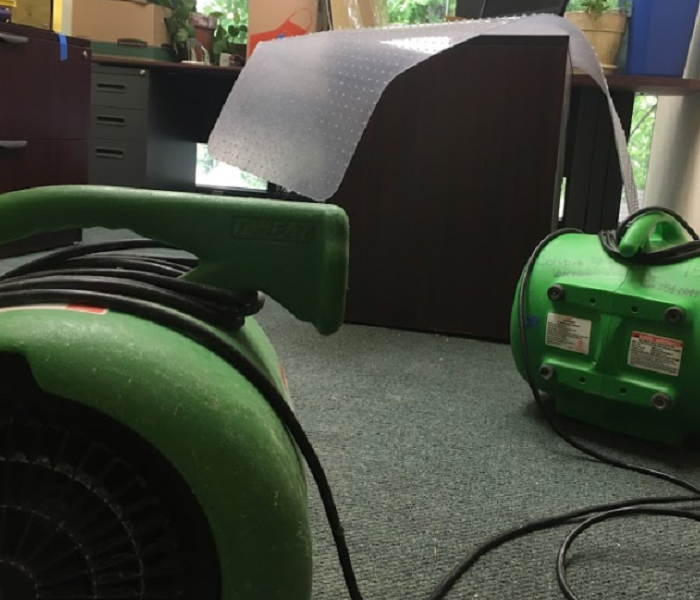 Everything would have been fine, except for the high winds that brought down several trees around one commercial business. One of those trees fell on the roof of the building, punching a hole right through the roof. Rainwater quickly flooded the area inside the building near the hole. The building owner received a call from his commercial tenants and immediately reacted to the emergency.

SERVPRO arrived to help with flood damage in his Vancouver commercial building. The owner was concerned about removing the tree and patching the roof so that no more water would enter through the roof. Our team responded immediately and quickly removed the fallen tree and placed a temporary tarp over the entire roof to prevent further wind and rain damage.

He informed his tenants of the steps, taken to resolve the damaged roof. His tenants arranged for SERVPRO to help them with the interior water cleanup as well. There was a great deal of debris from the tree coming through the roof. There was water as well in one of the offices. Our technicians removed all of the debris and began removing computers, office furniture, and employee personal items from the area. Everything was wiped down and dried before moving.

The carpeting in this room was a laminated design. The carpet had begun to separate in many areas. We removed the carpet and underpad. Fortunately, the subfloor only needed our air movers to dry out the floor before new carpeting and under padding was installed. An electrician also checked out all of the electrical connections and circuits to verify they were safe and in good condition.

Only one wall required repairs from a branch of the tree striking the wall after coming through the roof. We removed the wall and installed a replacement. The roof was also repaired and sealed up. Both the owner of the building and the tenants were thankful no one was hurt and that repairs and restoration completion occurred quickly.

Call SERVPRO of E. Vancouver / Clark Co. at (360) 254-0049 for 24/7 service. We serve Norton, Raynham, Rehoboth, and surrounding areas. We strive to minimize the damage. We're Faster To Any Size Disaster.